In mammals, phagocytosis by phagocytes (e.g. macrophages, dendritic cells, and neutrophils) is essential for a variety of biological events, including tissue remodeling and the continuous clearance of dying cells. Furthermore, phagocytosis represents an early and crucial event in triggering host defenses against invading pathogens. Phagocytosis comprises a series of events, starting with the binding and recognition of particles by cell surface receptors, followed by the formation of actin-rich membrane extensions around the particle. Fusion of the membrane extensions results in phagosome formation, which precedes phagosome maturation into a phagolysosome. Pathogens inside the phagolysosome are destroyed by lowered pH, hydrolysis, and radical attack. These early events that are mediated by the innate immune system are critical for host survival. As a result of this process, pathogen-derived molecules can be presented at the cell surface (antigen presentation), allowing the induction of acquired immunity.
Phagocytosis can be assayed in vitro by measuring the engulfment of a substrate by phagocytic cells. Various substrates may be used including red blood cells, E. coli, and Zymosan (yeast) particles.
Our phagocytosis (E. coli) test kits use E. coli particles labeled with an enzyme as pathogens to phagocyte. This method does not require manual counting of E. coli particles in cells. The particles outside the cells are blocked before the colorimetric detection of the particles inside the cells. This format allows for quantitative and high throughput analysis to effectively measure phagocytosis. These kits allow analysis of the effect of TLR ligands and activators and inhibitors of phagocytosis. 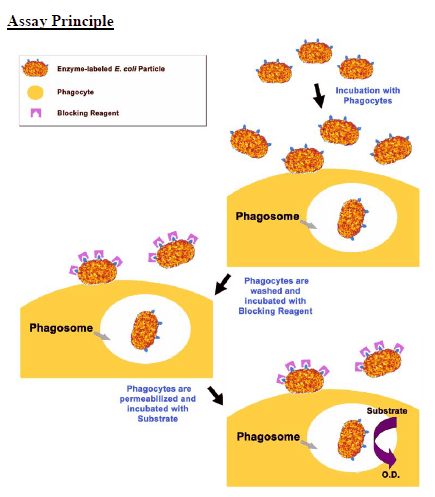