Multiple Myeloma oncogene-1 (MUM1), also known as Interferon Regulatory Factor 4 (IRF4), is a transcription factor that functions to regulate gene expression in response to the signaling pathways of interferon and other cytokines. MUM1 is expressed in the cytoplasm and nuclei of plasma cells, as well as in some T-cells and germinal center B-cells. Expression of MUM1 is present in a variety of hematolymphoid neoplasms and in malignant melanoma, but is absent from other human tumors. MUM1 expression has been indicated in both pediatric and adult diffuse large B-cell lymphoma (DLBCL), and, when the immunostaining status of CD10 and Bcl6 is also considered, Anti-MUM1 can be used to sub-distinguish germinal center type DLBCL from the non-germinal center type. Anti-MUM1 stains normal melanocytes, melanocytic nevi, and malignant melanoma in non-hematopoietic tissues, and can also stain other B-cell lymphomas such as lymphoplasmacytic lymphoma, grade 3 follicular lymphoma, primary central nervous system lymphoma, primary mediastinal large B-cell lymphoma, Burkitt-like lymphoma, and classical Hodgkin’s lymphoma. 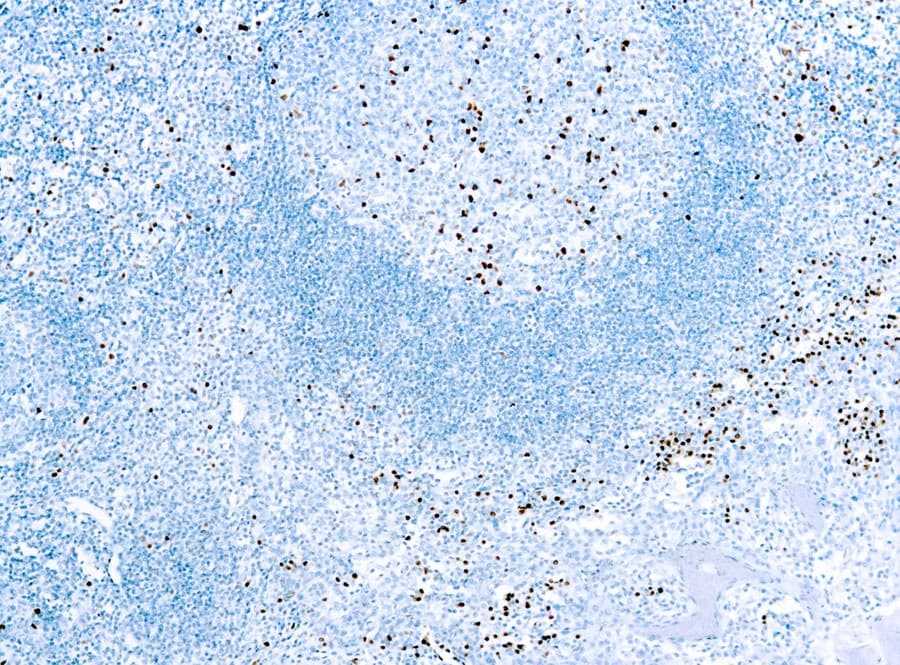